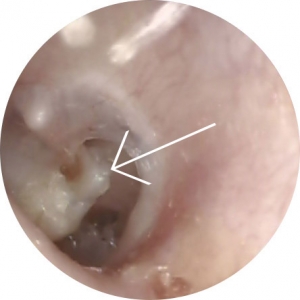 Cholesteotoma through perforation in eardrum

Cholesteotoma is an uncommon but potentially serious condition affecting the middle ear and/or mastoid. More detail can be found here.

There are a number of different operations that can be performed for cholesteotoma, depending on the size and position of the lesion. The most common procedures are as follows;

Atticotomy is a smaller operation that is usually sufficient for small cholesteotoma's. The approach is generally via the ear canal. The canal skin and eardrum are gently elevated to allow access to the middle ear space. Cholesteotoma's often form in the roof of the Middle Ear space, a region called the attic. To allow a good view into this area some bone overlying the attic region often needs to be removed.

Once the disease has been removed the eardrum is replaced, the ear canal is packed and the incision closed. A dressing and crepe head bandage are then applied.

The approach is via an incision behind the ear, an Atticotomy is performed as above and the mastoid air cell system is explored from behind. The disease is removed from both areas, but the bone wall between the mastoid and ear canal is preserved.

Once the disease has been removed the eardrum is replaced, the ear canal is packed and the incision closed. A dressing and crepe head bandage are then applied.

The advantage of this approach is that the normal anatomy of the eardrum and ear canal is largely preserved.

This operation is similar to the combined approach above however the bone between the mastoid and ear canal is removed to allow better access. This is often a good operation to do if there has been extensive damage, caused by the disease to the small bones of hearing (ossicles).

Once the disease has been completely removed the eardrum is draped over the remaining ossicle (the stapes) and usually results in quite good hearing. The advantage of this procedure that allows for excellent access to advanced cholesteotoma. The disadvantage is that it leaves a large cavity that is not infrequently prone to infection.

This is a very complex area and the surgery needs to be planned on an individual basis. I will go into a lot more detail regarding the pros and cons of the various procedures during your consultation and advise you which approach I think is most appropriate.

Ear surgery is normally very well tolerated, pain and nausea are usually minimal but medications are available to assist if required. Transient dizziness is not uncommon with major ear surgery such as this. The bandage is quite firm and can occasionally cause a mild headache.

The morning following surgery the bandage will be removed and replaced with the smaller cotton wool dressing. Providing a normal diet is being tolerated discharge will occur mid-morning.

There are no dietary restrictions

For the first few weeks I prefer the avoidance of strenuous activity. The duration will depend on the individual operation but will be for at least two weeks.