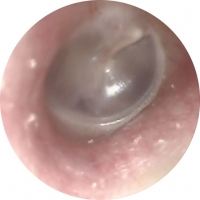 The normal eardrum seperates the ear canal from the air filled middle ear space. It has a translucent pearl grey appearance in most cases. On inspection it is usually apparent if there is fluid, infection or other abnormalities in the middle ear or ear canal. 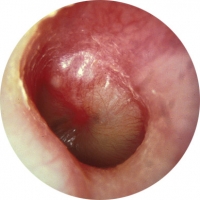 Infections of the airspace of the middle ear are called acute otitis media. Symptoms include pain, fever, poor sleep and hearing loss. The appearence shown here of an inflammed bulging ear drum with yellow pus is typical. On occasion the eardrum may perforate secondary to  pus under pressure in the middle ear space. After rupture pain decreases and often infected mucous discharges from the ear.

These are usually bacterial infections and as such are treated with antibiotics in most cases.

Grommets are indicated if they are frequent, severe or fail to resolve with antibiotic therapy.

Persistent fluid in the Middle Ear 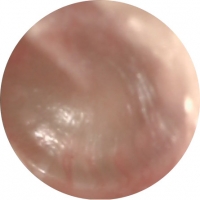 Otitis media with effusion may occur after an infection has resolved or can occur without any obvious history of previous infections.

Most cases will resolve spontaneously within three months. If the fluid is still present after three months the chance of recovery is small and Grommets are usually advised.

Otitis externa is an infection of the ear canal. It is usually either a bacterial or fungal infection and presents with pain blockage and hearing loss. It can occur spontaneously or as a result of water exposure or wax build-up in the ear.

Most resolve with antibiotic and/or antifungal eardrops. Occasionally oral antibiotics are required.

Quite commonly the ear canal will fill with debris and the infection will not resolve until this is cleared. This is normally fairly easy to achieve using the microscope in my rooms. 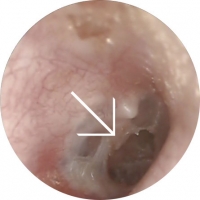 Holes in the eardrum can occur as a result of infection, trauma or previous surgery including Grommets.

Often they cause little or no problem. Some however can be prone to recurrent infections with discharge from the ear canal. Some of the larger holes or indeed small holes on the posterior aspect of the drum can cause significant hearing loss.

In these situations a tympanoplasty may be considered. 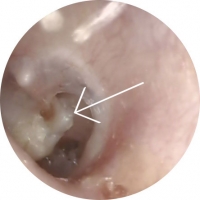 Cholesteotoma through perforation in eardrum

The normal eardrum has skin on its outer surface and a moist lining on its inner surface, continuous with the lining of the middle ear. Cholesteotoma is defined as skin growing from its normal position on the surface of the drum into the middle ear space and mastoid.

Generally they form a skin filled cyst that will expand and slowly destroy the structures of the middle and eventually Inner ear.

Why do they form?

Cholesteotoma's can develop in a number of ways. Most commonly;

What are the symptoms?

Symptoms will vary from case to case but can include any or all of the following;

What is the treatment?

Cholesteotoma is a serious, progressive and destructive condition with potentially very serious complications. As such management is almost always surgical. A brief discussion of the surgical options can be found here.